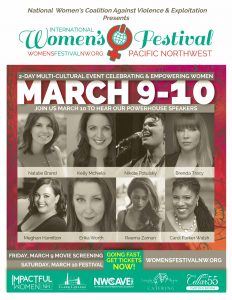 The weekend will kick off with a Film Screening of The Hunting Ground followed by a powerful program with emcee Ruth Brennan, keynote speaker Brenda Tracy and closing with the launch of the organization’s WA Says No More Campaign. “One in five college women will be sexually assaulted, yet only a fraction of these crimes are reported, and even fewer result in punishment for the perpetrators. This can stop. The first step is to start a conversation about the problem and we plan to do that this year,” said Michelle Bart, President of NWCAVE.  Tickets are $10 and includes a reception sponsored by Vida Flare, Costco, Clark College and WSU-Vancouver. www.womensfestivalnw.org

The International Women’s Festival Northwest continues at Clark College in Gaiser Hall on Saturday, March 10, 2018 beginning at 8am with a continental breakfast and networking. The day will include lunch, over 20 speakers sharing their stories of empowerment, interactive workshops, exhibits, resources, music, dancing and the presentation of our 2018 Pebble Rebel Award honoree.  The day will end with a sponsored wrap-up party at Cellar 55 for those who attended the Festival! Festival emcee is Natalie Brand from KING5 in Seattle.

Tickets are only $35 ($20 for students) for both Friday and Saturday all-access passes!  Proceeds from the Festival will go toward the ongoing programming on sexual assault, domestic violence, human trafficking and anti-violence efforts that NWCAVE works on throughout the year.

For tickets, go to www.womensfestivalnw.org.