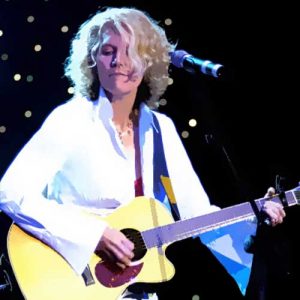 Suzanne Buirgy was born in Southern California Started WRITING songs at 12 An ORPHAN at 15 LIVING on her own in the Hollywood Hills at 16 Joined The Young ACTORS’ Company MUSICAL THEATER on Theater Row in Hollywood The PIRATES OF PENZANCE NY Shakespeare Festival’s 1st National Tour Lead SINGER for the all-girl band The Riveters Evolved into a SOLO performing songwriter Co-produced her first CD, A SMALL WORD Got a DAY JOB in the MOVIES and numerous screen credits as a DPM in VFX WON the KERRVILLE New Folk competition in 1999 Co-produced her second CD, THE VIEW FROM HERE TOURED all over the country OPENED for Janis Ian, Dar Williams, and others.

Suzanne started working for DreamWorks Animation in 2005 Felt COMPELLED to write a musical and so she has…now a Producer with DreamWorks, when not doing animation, she is singing and will be gracing our stage in 2020!